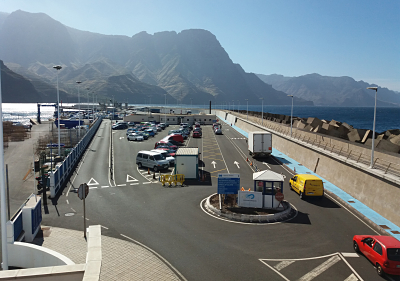 The entity will act in the passenger terminal, in the dikes and in the accesses, to increase the comfort and the security of the users

The public entity enterprise Puertos Canarios has awarded several improvement works in the Port of Las Nieves in Gran Canaria, which will begin imminently to improve the service currently provided to the users of the port with greater movement of the network of Canary Islands in Gran Canaria. The works, which aim to increase user’s comfort and safety, will mainly affect the passenger terminal and the embarkation esplanade, but also the accesses to the dock and the dike.

Passenger terminal will be the subject of the complete replacement of existing lamps and luminaires by built-in LED technology, as well as waterproofing the roof and cleaning the facade.

On the other hand, work will also be undertaken on maintenance of the embarkation esplanade, which contemplates the deep cleaning of the metal surface of the existing canopy as a waiting area for the passage, and then apply a coating. In addition, the continuous concrete pavement for pedestrian use will be repaired and the existing fencing at the end of the dam will continue until the area where the lighthouse is located, which will also be fenced to prevent access by unauthorized persons.